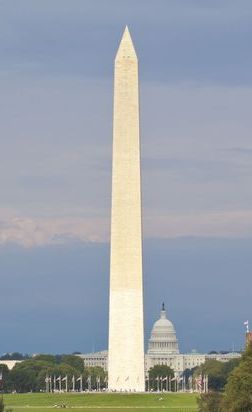 Here is wisdom. Let him that hath understanding count the number of the beast:

for it is the number of a man; and his number is Six hundred threescore and six.

Is The Washington Monument in fact

My simple answer is YES. I will show you the evidence for my coming to this conclusion first, here below. Then I will document “why” and “how” this came to be. For now, keep in mind that in many letters George Washington warned against the Illuminati, who were and are Luciferians. If they built the obelisk, and made it 666 feet high it would be too obvious that they were behind it; so they made it 555 feet high instead on a 55 foot square base. Here’s why:

Both quantities are “multiples” of 55.5

Before getting into “why” they did this and “how” it came about it is important to understand that “measuring” is an inexact art, just as is the art of “building”. Up until just recently The Washington Monument was said to be 555 feet 5.125 inches tall based on measurements made back in 1884. Measurements resulting from a National Geodetic Survey carried out with modern instruments in 2013-14, with a tolerance of only 1/32 of an inch, show it to be 554 feet 7.34375 inches tall. Whatever the exact measure actually is isn’t necessarily the “designed” or intended measurement. In fact today’s monument, begun in 1848, is not the original design finished in 1884. Nor are the personalities and organizations who conceived and began the project the same who changed the design and finished it.

In his farewell address, Washington urged Americans to avoid excessive political party spirit and geographical distinctions. In foreign affairs, he warned against long-term alliances with other nations. The address was printed in Philadelphia’s American Daily Advertiser on September 19, 1796. In short, Washington urged America to stay OUT of other nation’s affairs. Washington was a nationalist, not an imperialist. If he were alive today he certainly would be a leading force in opposition to the global-ism of today. He was for the individual over the state; the republic over any notion of empire. And his memory, in words and deeds, literally raises up the rights of the common man like never before in history.

These were the ideals that inspired our republics founding fathers. Not all of them, but those that won out in the early years before and after the revolution. And these were the ideals that I believe in 1833 motivated the Washington National Monument Society, a private organization, to form a funding drive to build a monument to the first president. They chose a design that was elaborate and ornate and very expensive. They began the construction and got as far as depicted in the picture above. Funds were lacking and the Civil War halted construction altogether.

Only “fake history” calls “The War of Northern Aggression” a “civil war”. Like it or not the southern states had every right to secede. In truth it was a battle against imperialism, and the imperialist won the war. And every imperialist at heart has visions of empire and global domination. Everything George Washington despised.

After the war an entirely new power structure had seized the nation. The long term vision of those in control saw the “state” as supreme and the people more or less as a resource to be used. These people, at the very top of the power structure’s pecking order stayed behind the scenes, as they do today, pulling the strings of their witting and unwitting dupes. They hated everything Washington represented; they despised the man. He had opposed them and warned others about them. We know this from his letters to various people which are today on display in the Library of Congress.

Those in control of the nation after the war were the illuminati Washington had warned against years earlier in his letters. These illuminati were avowed Luciferians. When construction was allowed to resume, not only had they redesigned the Monument but it had been re-purposed as well. No longer a glorification to a great man of the people, it now had become an homage to the great Satan, the deceiver, the beast of revelation whose number is Six hundred threescore and six. We KNOW this to be true because of its now obvious purposely incorporated proportional relationships embodying this very significant number (at least to the illuminati and most Christians everywhere).

Remember, if they had built the obelisk 666 feet high it would have been immediately obvious to the then predominately Christian population what they were up to and who was behind it; so they made it 555 feet high instead on a 55 foot square base. Once again because:

Both quantities are “multiples” of 55.5