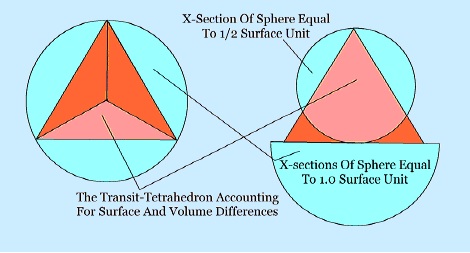 A unit of volume reproducing by dividing its surface into two equal units of the same form as the original, regardless of form. . . will always eject the exact same amount of “excess volume” in the process of dividing into two such forms.that, packaged as two tetrahedrons, their triangular faces are congruent to the circular cross-section of the spherical equivalent of the volume unit. These are two “Transit-tetrahedrons”. The volume of any of the second generation forms, if packaged as a sphere, will have it’s diameter equal to the height of this tetrahedron.

A given volume unit can take on an infinite variety of differing shapes with a wide range of surface areas associated with each. Yet when any one of these various forms divides its surface into two equal units (identical in form to the original unit), in each case, the amount of the original’s volume that cannot be accommodated within the surface of the two new forms will always be the same. This excess volume, packaged as two equal regular tetrahedrons, is so scaled that the tetrahedron’s face is congruent to the circumference of a sphere equal in volume to the original volume quantity.

The fact that the surface areas of the original volume quantity vary across a range of assumed forms makes no difference in the amount of excess volume ejected. It will be the same in all cases. For example, a tetrahedron that is the same volume as a sphere has a surface area 1.4900… times greater than the sphere. But when both forms divide their surface areas into two new units identical in form to the original forms, excess volume that cannot be accommodated is the same amount in both cases.

A given surface unit can assume an infinite variety of different shapes creating a wide range of volumes associated with each. Yet when any one of these various forms divides its encompassed volume into two equal units identical in form to the original’s particular form, the amount of surface “created” will always be the same in each case. For example, the same surface quantity in the forms of a sphere and a tetrahedron vary in the amount of volume contained by each form. But when their volumes are divided in half and repackaged in the same forms as their respective original forms, the surfaces of their second generation forms will be the same even though their volumes vary.

Start with any three dimensional geometric form with its volume and associated surface area. It’s possible to increase the surface area either by distortion or division. But no matter what is done to the initial form, its volume will never increase.

On the other hand, since volume is always conserved when it’s divided one-into-two, new surface area is again created with each successive division. But, the volume will remain the same as in the beginning form no matter how many times the original volume unit is divided.

This geometric truth has its’ equivalent in science’s “cannot create or destroy Universe’s beginning quantity of energy”. It can only be transformed via E= mc2. Our physical universe is an increase in second power quanta-ty. It is a creation comprised of surface(s) resulting from the division of a primal finite mass-volume. The cosmological analogy to geometry’s volume-unit is science’s “primal singularity”, with the present day particles on the atomic and sub-atomic scale being comprised mostly of surface. We know that this must be so since geometry demands that small things be mostly surface and large things are mostly volume.

This leads directly to the geometry of sunshine.

THE GEOMETRY OF SUNSHINE

What can geometry tell us from its own inherent properties that might just shed some light on why the sun shines?

For example, imagine a sphere. It is well known that a sphere’s circumference is pi times the length of its diameter. This holds true for any size sphere regardless of how big or small. The sphere also has two other important qualities: surface and volume. But unlike the ratio between every sphere’s diameter and circumference, which is fixed, the amount of surface compared to volume varies depending on the size of the sphere.

Geometry gives us a sort of benchmark in the form of a sphere having a six-unit diameter. For this particular size sphere has exactly one surface unit for each volume unit contained beneath. Its surface and volume are equal; they are in a one to one ratio, a harmony or balance of some kind. A little larger sphere will have a little more volume than surface; and a little smaller sphere will have a little more surface than volume. A sphere having a diameter twice that of the benchmark six unit diameter will have two volume units for every surface unit. And one with half the benchmark diameter will have two surface units for every volume unit.

The trend is clear. The larger a sphere gets the more dominant its volume quality becomes at the expense of surface. And the smaller a sphere becomes the more surface dominates. Taken to the two extremes we can see that, geometrically speaking, the largest sphere is all volume with comparatively negligible surface; and, the smallest sphere is all surface with negligible volume. This relationship holds for “things” in general (not just spheres) regardless of their form.

Now if we drew a picture of a small sphere, and then a picture of a larger sphere, without holding one next to the other for a size comparison both pictures would look the same. But in reality we know that the spheres are very different since they have different surface to volume ratios.

Using two colors, and starting with the benchmark six-unit diameter sphere, paint its’ surface dark blue and fill its volume with bright red. Of course all we see is its rich blue surface until we slice the sphere in half revealing the bright red volume within. Remember, this sphere has a one-to-one ratio between surface area and volume. So how does this change when we “paint’ a picture of a larger sphere, a sphere having more volume than surface?

We can illustrate this difference in the following way. And, we can see this difference in sphere size without cutting into the larger spheres. Imagine for example, that as the size of the sphere increases its’ blue surface begins to fissure like fine cracks in an egg’s shell with the red of the volume within leaking visibly through the blue surface. The larger the sphere considered the more units of volume each individual unit of surface must contain. A very large sphere illustrated in this manner would look like a red-ish ball with a fine blue netting stretched over its’ exterior. The “largest’ spheres (or, all large spheres after a certain size) would be literally red balls of volume with imperceptible surface according to the parameters of this particular manner of modeling.

Again, starting with geometry’s benchmark six-unit diameter sphere, we find that surface area begins to dominate over volume as comparative spheres diminish in size. To see this by the parameters of our present modeling it is necessary to cut into these smaller spheres. For as the size of the considered spheres diminishes, a cross-section of the spheres would show a thickening of surface at the expense of its’ volume core. The dark blue color of the benchmark sphere’s surface would be seen to penetrate deeper and deeper into the red-ish core of volume as “size” diminishes. Finally, after reaching the “smallest” spheres, it practically disappears altogether. Thus in our model, the cross-sections of the smallest spheres are “painted” the same blue as their surfaces.

Now our Universe is filled with spheres. How do these spheres appear in nature, in the real world? Does the structuring of the Universe show this design demand of geometry?

How can we illustrate or model this difference?

Our Earth is a good example of a real sphere in a universe filled with many different sized spheres . . . yet still, a universe designed with but one yardstick, one fundamental “unit”. Earth is a large enough sphere to have an “at-most-sphere”. This is simply to say that its surface thins out with distance from the center. The larger planets have thicker and higher atmospheres. Their surfaces seem to be oozing out stuff (volume?) when compared to our much smaller Moon which has a sharp definition between its’ surface and the rest of universe. Jupiter, the largest of our neighboring planet-spheres, has a volume approaching “kindling” size, and an atmosphere that is thick, deep, and turbulent. Its surface boundary is most indefinite. But the sun, the biggest of all nearby spheres, is literally volume uncontained by surface, which leaks though and out into the rest of universe.

Going in the other direction toward smaller and smaller spheres (or “things”) we find there are asteroids with crisp well-defined surfaces, dust particles, electrons, etc. These, because of their extremely small size, are practically all surface . . . at least according to the dictates of geometry, and they should manifest themselves accordingly.

Many years ago I conceived and created the sculptural model depicted below as illustration of one of Geometry’s most formative principles: scale, and its necessary consequences (such as the “Geometry of Sunshine”). I named this original sculpture “Harmony” for reasons more profound than it having pleasing proportions.

A curious viewer would soon notice that the diameter of the sphere was the same as the width of the cube; and then, that the two of them together were the same height as the tetrahedron. But it is the sub-division of the cube into a six unit edge-length that gives the whole arrangement scale.

It happens that a cube so proportioned has its surface area equal to its volume. They are in a one to one ratio; each quality just balances the other. The sphere with its six unit diameter, and the tetrahedron with its two times six unit height also exhibit this harmonious trait, as does any other polyhedron so scaled.

Many years later, in 1999, I discovered that in two dimensions Geometry similarly has a harmonic preference for all polygons. “Harmony 2d” (see image inside of back cover ), and “Harmonic Scaling” (see image inside front cover) illustrate this preference. In these images   is an   arrangement of regular polygons ranging from the minimal sided triangle to the infinite sided circle. Scale manifests only after the grid is applied (subdividing the circle) revealing its two-unit radius. At this “size” commensurate polygons are in a state of balance with respect to perimeter units and surface units: they are in a one to one ratio; they are in harmony.

The most important and first study is of numbers in themselves:

Not of those which are corporeal

But of the whole origin

OF THE ODD AND THE EVEN

And the greatness of their influence

On the nature of reality.

TABLE OF CONTENTS    CONTINUE TO NEXT PAGE   HOME