FOR THOUSANDS OF YEARS, A SIMPLE VIEW OF GEOMETRY

HAS BEEN PURPOSELY HIDDEN FROM HUMANITY

3 dimensional expressions of the “Unit” in his two thousand year old book Elements.

THE “FUNDAMENTAL UNIT” IN THE GEOMETRY OF FORM

For over 2000 years Euclid’s line of unit length, square of unit surface area, and cube of unit volume have served as the geometric models of the three “powers” or “expressions” of what is essentially the same unit. Of the three forms, only the unit-volume cube has the potential for modeling in a 3-dimensional space-frame. This is because the unit-area square has only two spatial extensions, and the unit-line but one. Nonetheless, from Euclid to the present day, these simple renderings of the Unit’s three (equal but different) manifestations serve as the foundation for all the rest of geometry.

But in a 3-dimensional space-frame, it appears that geometry actually prefers a somewhat different accounting system. It is superior to Euclid’s in that its line and surface forms have all the qualities of actual geometric objects possessing not only 3-dimensional extension in a 3-dimensional space-frame, but surface and volume components as well. For in the Geometry of Form, the fundamental unit of length, (1.0)1, manifests as the sum of a tetrahedron’s edges; and, its corresponding surface-unit, (1.0)2, is in the form of a cube with a surface measuring 1.0 unit. The volume unit, (1.0)3, is the same as Euclid.

The image at the top of the page is a depiction of the first two powers of geometry’s fundamental unit. The three two-tone blue triangles stacked atop one another represent three regular tetrahedrons. Each tetrahedron has edge-lengths which sum total 1.0 lineal unit. Euclid’s line has been reconfigured into the six edges of a regular tetrahedron. And three of these tetrahedrons together are seen to be perfectly scaled to the red square behind them.

The red square represents one of the six faces of a cube. The total surface area of this cube is 1.0 surface-unit. Now it’s essential to understand the significance of this drawing. For if the stack of 1.0 lineal unit tetrahedrons was shorter, or taller, than the height of the 1.0 surface unit cube there would be no commensuration (common measure) and no “superior” forms of expression. But because they are the same height, we know geometry likes this arrangement. This quanta-sization between 1.0 surface-unit in the form of a cube and 3.0 lineal-units as the edges of tetrahedra is so deeply in grained in geometry that the three tetrahedrons can combine their lineal components into one tetrahedron (i.e., the sum of its’ edges equals 3.0 lineal-units) and this tetrahedron’s height is likewise equal to the height of the 1.0 ’s: a cube with edges measuring 1.0 unit in length and a volume equal to 1.0 unit surface-unit cube. 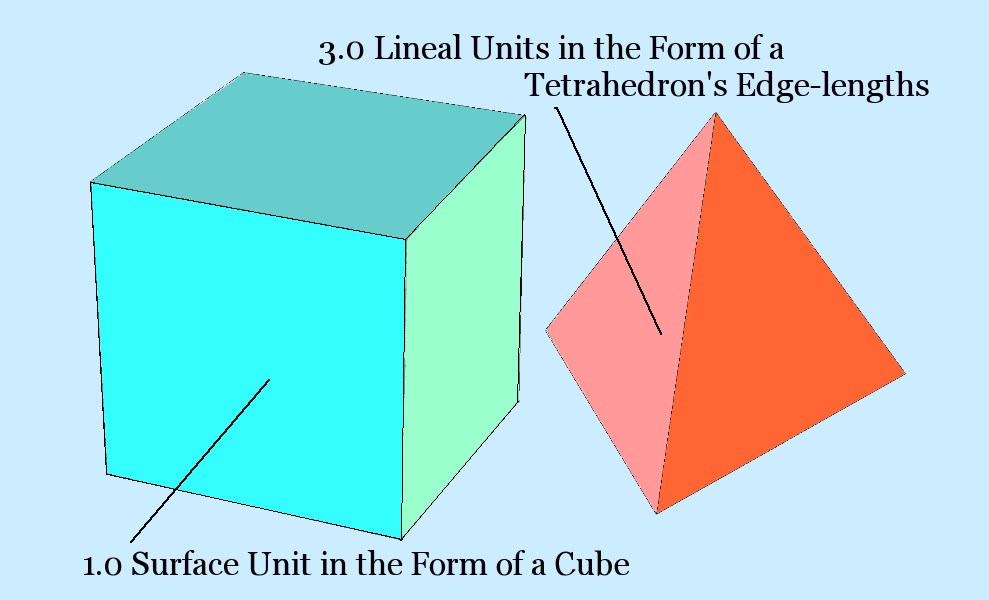 The first two manifestations of geometry’s fundamental unit (as depicted by the three stacked tetrahedrons and associated cube of equal height) if replicated and enlarged so that the next generation of three tetrahedrons have edge lengths equal to the original (red) cube’s edge length, then the height of this new stack of tetrahedrons is also the edge-length of a cube with a volume equal to 1.0 volume-unit. The yellow square in the diagram (below) represents one face of this volume 1.0 cube.   So we can find within these two combined fractals an image of all three expressions of geometry’s fundamental unit. 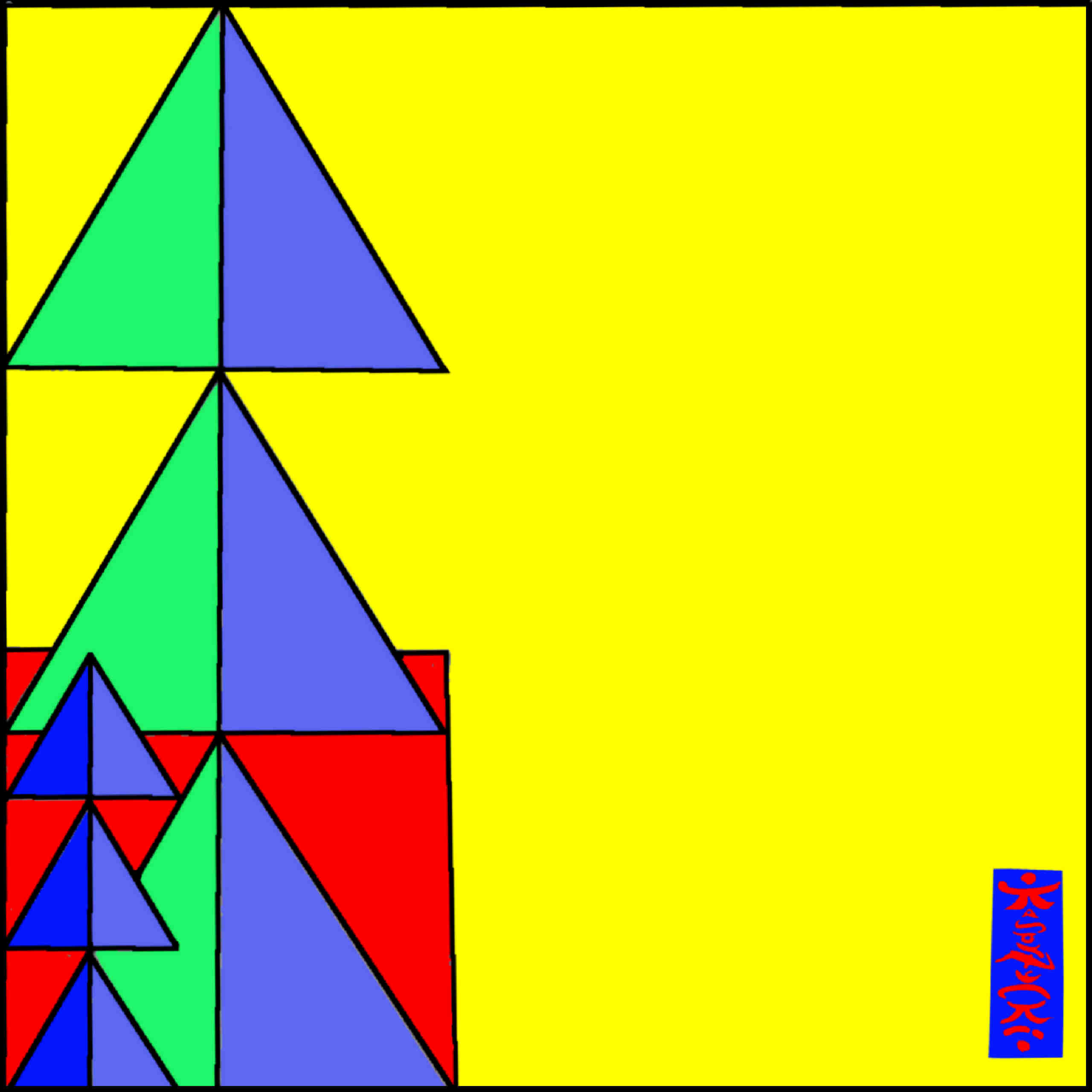 There is another way to enlarge the original fractal. Rather than having the edge of the 3 new tetrahedrons equal the cube’s edge, geometry also favors the fractal with the tetrahedron’s height equal to the cube’s height. The resulting cube (having its edge equal to the new stack of three tetrahedrons) has a volume 0f 1.8371173… and is seen to be that special number sequence that always seems to appear in one form or another whenever the concept most economical packaging of volume is set to geometric modeling.

Evidence that these quantities are fundamentally built into the structure of geometry can be further illustrated when the cubical volume units are transformed into spherical volumes and the 1.0 surface-unit cube into a 1.0 surface unit tetrahedron.

Eight of these one surface unit tetrahedrons can be arranged in a single omni-symmetrical form as a cuboctahedron. (Note: the cuboctahedron as Archimedes called it, or vector-equilibrium as coined by R. Buckminister Fuller, is geometry’s minimum nucleated structure arising from the properties of the closest packing of uni-radius spheres.) One vertex of each tetrahedron share in common the center point of the structure. On the surface of the cuboctahedron are the eight triangular planes opposite their common central vertex leaving six ½ octahedronal voids in between.

If we begin instead with the two ideal spherical volumes (1.000… and 1.8371173…) arranged sharing a common center point, then the eight tetrahedrons uniting these spheres as a cuboctahedron each has an actual surface area measuring 0.999(829…), i.e., the one surface-unit tetrahedron. 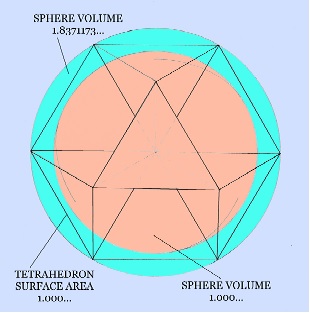 The 1.0 unit-volume cube and the 1.8371173… unit-volume cube have surface areas measuring 6 and 9 units respectively. The surface of the larger cube is 3/2 the surface of the smaller. This same 3/2 surface relationship applies to the volumes in their spherical forms as well. In fact, the quantity 1.8371173… expressed another way is [(3/2)1/2]3. As we will see, this simple relationship between 2 and 3 plays a most formative role in the structuring of geometry. This becomes especially true with respect to transformations, whether by distortion or division, and geometry’s demand for a strict conservation of all surface and volume.

TABLE OF CONTENTS    CONTINUE TO NEXT PAGE   HOME