Balance And The American Silver Dollar

The act of weighing something originally involved the use of a “balance”. A balance is the simplest of all scales. Geometry recognizes the importance of “balance” and has special forms and scales (as in sizes) which embody “equality”. The now familiar Roman gallon of 216 cubic inches is one such real-world example when modeled as a cube. This is because a cube with a 6 unit edge-length has both its volume and surface area equal: 216 “units”. These two opposing qualities (volume being expansive and dispersive, surface being contractive and tensive) are in harmony, they are equal. Every outward pressing volume unit has one surface unit containing it. They are balanced, but only in this specific size cube.

Similarly a tetrahedron with an edge-length equal to “the square-root of” 216 also has its volume and surface in balance one-to-one. Each measures 374.1229746… units, and like the previously discussed cube, only this specific tetrahedron embodies the concept of “balance”. The height of this tetrahedron is twice the edge-length of the cube: 12 units.

At its inception, each of two most fundamental constructs embodying the first two dimensions of the Unit, i.e., . . . the line configured as the six edges of a tetrahedron; and the unit of area configured as the surface of a cube, enclose a specific volume quantity. The 12 unit of surface, as a cube’s surface, holds within exactly 124.707658…volumes contained by the 11 unit of length when configured as the sum of a tetrahedrons edges. Three of these 1.0 surface unit cubes together contain 374.1229746…of these units of volume, which as was just shown above, can be equally expressed by the quantity 1 / .002672918… and can represent a 1 / 10,000th part of 26.72918… grams, or equally 412.5 grains. This is the gross weight of the Silver Dollar, to .999986… fine.

The following exercise will show just how deeply embedded in geometry are some of the weight measures “chosen” in the 1790’s for both the American silver dollar coin and again the “new” metric system in France, in which its new gram based-unit is equal to the weight of 15.43235835… grains. Just above we saw how three one-surface unit quantities (configured as cubes) together hold a volume equal to 374.1229746… “units” (of the volume contained by the line of 1.0 unit as the sum of a tetrahedron’s edges). If these three 1.0 unit surfaces are reconfigured into a single two-dimensional square, then the edge-length of this square is the square-root-of-three, or (3)1/2. How does this relate?

Look at the first two equations below. Note the “quantities” involved: the square-root-of-three, or (3)1/2 times the exact grain/gram conversion ratio; and, what is arguably the weight of the American silver dollar in grams in the first equation, and grains in the second!

Now look at the third equation immediately above. It too is dependent on “the square root of three units”. But most importantly, it literally unites the two different measures of the same weight:

One ten-thousandth part of the equilibrious-tetrahedron’s volume is .037412297… This equation again shows that the proportions defining the grain/gram quantitative relationship is built into the system of geometry and was NOT a creation of the French scientists. One “gram” divided into .0648 unit quantities contains 15.43209876… such quantities. Of course we now call these quantities “grains”.

The following example also demonstrates just how important the name is that is assigned to any particular unit. This equation makes no mathematical sense without the quantities being assigned the names (first) grains, and then grams:

Certainly, the previous examples firmly establish that this 374.12297… quantity is an essential part of the very fabric of geometry itself. Now, take a look at its impact on some of the other measures of man.

A few pages back we saw how the Winchester Bushel and its subdivisions are actually measures built into the structure of geometry. They are very special quantities not just to geometry, but as we also saw, to the volume size packaging of the 412.5 grain units of pure silver and copper. The fact that these physical elements themselves conform to the geometry of the gallon dry measure is a signpost that there is some kind of “special-ness” associated with this unit of volume. Some of this becomes apparent when this measure is used with another measure just shown to be special as well. This is the quantity 374.12297… which, as a measure of gallons dry, reveals some quite astounding correlations among some other common units of volume measurement.

For example, 374.12297… gallons dry is 100,565.1908… cubic inches. But this measure of volume is also 58,000.3741… imperial fluid ounces; that’s exactly 58,000 to a precision of better than .99999… fine! (Note: the “zero” separation creates and clearly shows a well defined “discrete” quantity.) This means that, to the same precision, this measure is also 11,600 imperial gills; 2900 imperial pints; and, 1450 imperial quarts. These two supposedly unrelated systems (gallon dry and gallon imperial) become correlated or commensurate when this special measure embodying harmony and balance comes into play uniting the two.

“Proof” that the relationships above are NOT coincidence can be found when we look at the reciprocal expression of this special measure: 1.0 / 374.12297… which equals .002672918… Again, as a portion of a gallon dry, it is at the same time .003110343… the standard American gallon which was England’s wine gallon for centuries before; .0248814… its pint measure; and, .0124413… the standard American quart. Now, look at these measured quantities in light of the following:

The measure corresponding to 1.0 troy ounce is the same measure gleaned from pure geometry to a precision of .999998495 fine! So too do the others correspond to at least .99999+ fine.

Now refer back to the photo on page 4. The cuboid in the foreground models the most efficient packaging of 648 cubets. Any one of the ten cubes in the background models 1000 cubets. Without naming the “unit” these 10 cubes and 1.0 cuboid are size-less and without substance. Nonetheless, they display the same ratio or proportioning as the 1000 liter and 648 liter measures derived from dividing the 374.12297… gallon dry measure. This is

(Earlier) the reader was shown that the relationship between the square-root of three and the quantity defining the number of grains in a gram was directly related to the gross weight of the silver dollar coin in measures of both grains and grams. The equations proving this have been restated below.

Below (at left) is a drawing of a rectilinear geometric solid which has been derived from these equations. This “cuboid” is an equivalent manifestation of this data. Its volume is 412.50120… cubic units; there is 26.729628… areal units in each of its four rectangular faces; and the edge-length of its two square faces is 15.43235835… lineal units. As presented (without any “named” unit) it is a size-less geometric form void of any substance. Its two lineal components are in a 1.0 / 8.9098762… ratio and are illustrated in the “cuboid” on the right. 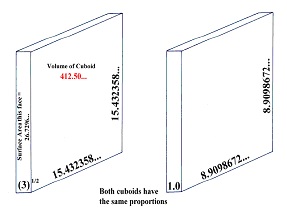 In The Geometry of Form there is a similar ratio: 1.0 / .89089871… Though they differ by a power of 10, these quantities are the same measure to .999900216. . . fine. This ratio describes the difference in lineal measures which arise when “the unit”, modeled as any geometric solid, divides from one-into-two (forms of the original). But, which quality of the solid-form unit is being divided? Is it one-unit of surface in the form of the solid; or is it one-unit of volume? This ratio 1.0 / .89089871… illustrates this difference.

A simple way to understand this principle is by using a cube with a 1.0 unit edge-length for the solid geometric form. This cube is one-“unit” of volume. After dividing this volume, each new cube’s volume will be .5 unit. Its edge-length is (.5)1/3, which is .793700526… On the other hand, if this same cube’s surface area (of six units) divides one-into-two instead of its volume, each new cube will have a 3 unit surface area; each face measures .5 square unit. This makes its edge-length (.5)1/2, which is .70710678…

The resulting lineal measures of these two different choices for dividing this cube create the ratios seen below:

Now, there can be no question that this ratio is not only fundamental to geometry, but as such, must also be a significant quantity to other geometrical constructs. For example, .89089871… as the surface area of a cubeoctahedron (a cube with its eight vertices truncated to the mid-points of its edges) results in its volume becoming .0680749… which is equal to the volume of a cube with a 1.0 unit surface area (to an accuracy of .9995… fine). Readers of The Geometry of Money may recall that in the chapter titled “The Great Metric Hoax” the cuboctahedron is shown to be the geometric model for the grain, and for the 480 grain troy ounce as well. So we shouldn’t be too surprised when .89089871… as the sum of the cuboctahedron’s edge-lengths results in any single edge measuring .037120780… unit. Again, this is a power of the same 371.25 quantity defining the number of grains of pure silver in the silver dollar coin to better than .99988… fine. 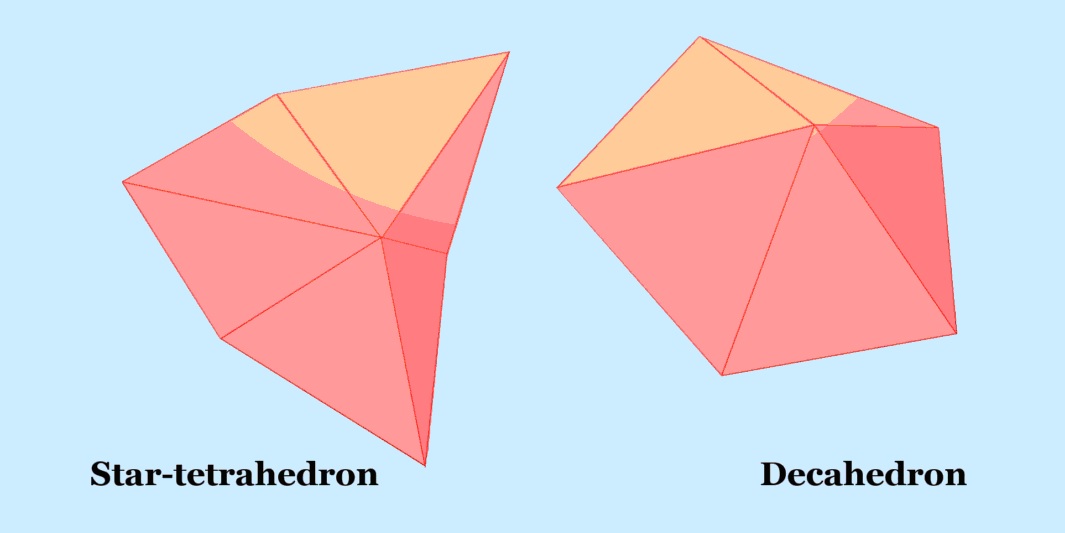 Another example may be found in the “star-tetrahedron”. This form is comprised of five smaller tetrahedra: one in the center completely surrounded by the four others. The significance of this form to all of geometry cannot be over stated and is explained in my previous book Some Thoughts on Universe, An Introduction to The Geometry of Form. The star-tetrahedron is the form of Unity’s “potential” actualized. If the edge-length of the star-tetrahedron is .890898718… then its surface area is 4.124188… and the sum of its edges (or edge-length sum) is 16.03617… Again, these are both “monetary measures” directly from the geometry of form:

The original form of Unity’s potential is called the “decahedron”. In its form as a geometric solid it has ten equilateral triangles. They combine into two five-sided pyramids which are in turn base-bonded into one form with seven vertices. If .890898718… is a decahedron’s surface area then .4535903… will be its edge measure quantity. This quantity is certainly a power of 453.592370…, or the number of grams in one pound avoirdupois

This same decahedron will have a volume equal to .05627466… which quantity is also a power of the 270 grain gross weight of the ten dollar eagle coin with respect to the troy ounce:

What the reader must come to understand is that this is “forensic historical evidence”. It is based upon an irrefutable level of mathematical certainty from which is exposed a magnificent hoax. This outright “lie” has been perpetrated upon all of humanity by some “others” amongst us who remain hidden from view. This group, by what ever “name”, has been uncloaked by their own works . . . something they never imagined would ever happen.