Anyone who carefully reads the following cannot help but see that “something” has been going on beginning a long time ago; and we’re not supposed to know about it. And, as much of my research reveals, the manipulations behind the scenes is still going on to this day. What is presented here is simply the proverbial “tip of an evidentiary iceberg”; simply an introduction to one of the greatest hoaxes in all of world history.

WHO DESIGNED OUR WEIGHTS AND MEASURES?

In 1969 I graduated with a degree in (ancient) history and had intended to teach. Even though I was offered a fellowship for graduate work, the choice to follow my passion as an artist finally won out. Nevertheless, I never stopped studying history and long ago also developed a love for mathematics. Over the course of the last four decades, I have independently compiled a body of original historical research all based on mathematics. The resultant evidence shows unequivocally that all of our systems of weights and measures have (clandestinely) been designed to conform to one simple system of geometry.

Even the physical gold and silver coins and paper notes of our U.S. monetary system have been secretly engineered to conform to this geometry. The mathematical roots of these coinage measures (highlighted in red) are inseparable from those we’ve come to use for land, weight, and volume. Some of the evidence proving these claims is presented here using the coinage measures as just one example typical to the rest of our measurement systems.

For example, nowhere are we told about the inseparable connection between our familiar marketplace avoirdupois ounce of 437.5 grains and the 412.5 grain gross weight of the American silver dollar coin. In the eyes of history, both quantities were derived subjectively and arbitrarily and have no direct relationship. But in the eyes of geometry, they are 1st dimensional equivalents.

Let’s have a look. Start by literally transforming a silver dollar coin into a perfect regular tetrahedron. We could actually do this physically in a proper laboratory but it is much easier, more accurate, and by far less costly using mathematics. Now if we construct a cube having its edge-length-sum equal to this tetrahedron’s, and fill that cube with the same coinage silver, when placed on a scale, we’ll find that this cube weighs 437.522320… grains. This is the avoirdupois ounce to a .9999+ degree of perfection. These two quantities are inherently related because the sum of each one’s edges is equal to the same length line.

Now, transform this 437.522320… grain cube into a tetrahedron and then make a cube of the same substance having its edge-length equal to this tetrahedron’s. The cube will weigh 3,712.5 grains. Ten silver dollar coins contain exactly 3,712.5 grains pure silver; and six-teen eagles (1834-1837) contained 3712 grains pure gold.

Once again, start with the 412.5 grain tetrahedron and then make a cube of the same substance with an edge-length equal to the tetrahedron’s edge. This cube weighs 3500.1785… grains and is one–half pound avoirdupois. This is to a .9999+ degree of fineness. And a tetrahedron made from a one-fifth part of the dollar coin (82.5 grains) has an edge-length the same as that of a cube of the same substance weighing 700.03571. . . grains. Ten of these cubes weigh one pound avoirdupois (7000 grains) to .9999+ fine. 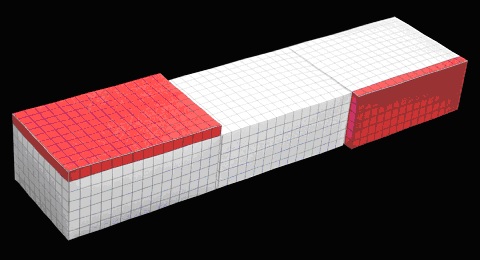 The white cuboid in the middle is the model’s core uniting the two different cuboids of 990 and 1050 cubic units. Once again, we have perfectly modeled the weights of the silver dollar coin (far right) and avoirdupois ounce (at left):

In 1836 the bushel measure was formally incorporated into the United States legal codes. It sub-divides into 4 pecks, 8 dry gallons, 32 dry quarts, or 64 dry pints. A single dry gallon measures 268.8025 cubic inches. This compares to today’s standard gallon’s 231 cubic inches. One year later, The Coinage Act of 1837 decreed 412.5 grains to be the new gross weight of the silver dollar, down from 416 grains. Within a year’s time two new seemingly unrelated measures became part of U.S. law.

But these measures are related, and were intentionally introduced together (at least in part) for the following reason:

Now history says nothing about legislation intentionally relating these two gallons, or the gallons and the weight of the silver dollar coin, or the coin and the avoirdupois ounce. The 1873 Coinage Act made a second adjustment to the already previously debased (in 1853) weight of the “fractional” silver dollar. Now the new weight of any combination of halves, quarters, and dimes equaling one dollar became 25 grams. And once again, in the choice of this quantity, we can see the work of the same hidden hand:

Both the standard gallon and dry gallon were used in England long before the American colonists brought them across the Atlantic. And long before these units there was the Roman gallon of 216 cubic inches, at one time used in many places throughout Europe.

In the photo below on the right we can see the common core uniting the Roman gallon and standard gallon (each cube = one cubic inch). The two tall columns sharing a common core in the photo (at left) model the Troy oz. and AV oz. (each cube equals 27 milligrams) Note how they share the exact same modeling-scheme as the gallons, as well as the AV oz. and silver dollar coin modeled above with their common core. 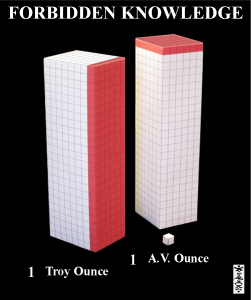 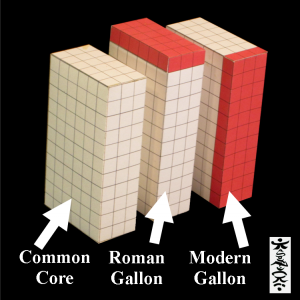 Also, take note of the coinage quantity 412.5 used in conjunct with π to create the two gallon quantities:

The Coinage Act of 1873 also introduced the 420 grain Trade Dollar. Why did they choose this quantity and not some other? Because it unites our two ounces pictured above. In fact it is their common core, that white column of 1008 cubes uniting the 1050 cube AV oz. with the 1152 cube Troy oz. Numerically they relate as:

Another proof showing these two ounce quantities to be natural units inherent to geometric structure is illustrated in the next photo. The proportions of the cylinder depicted make it a “Cylinder of Maximum Volume”: i.e., given a fixed unit of surface-area, this proportioned cylinder captures the most volume using the least surface–area. The diameter of its circular end planes is equal to the height of its side, and to the diameter of a sphere snugly embraced within. If the combined volume of the cylinder and the tetrahedron set atop and tangent to the cylinder’s circumference is equal to 1.0 then the cylinder’s volume equals .9114566…

What this means is that if the cylinder weighs 437.5 grains, then the addition of tetrahedron made of the same substance as the cylinder makes the two forms together weigh 480 grains (one troy ounce).

Forensic history based on mathematics has produced substantial unimpeachable evidence proving that the metric system is inherent to geometry, as too is our standard inch based system. Even if the French surveyors actually conducted a survey in the 1790’s prior to the introduction of the meter, it seems apparent they already knew the answer they were seeking. For geometry clearly shows that the American monetary measures, along with the grain/gram conversion quantity, to have been “borrowed” or “stolen” from the fundamental constructs of geometry. This is simple to prove. The following is but one of many pieces of evidence.

The gross weight of the silver dollar coin is 412.5 grains. To us, this “number” is first and foremost a “quantity” of weight-standards; but to geometry, it is simply a “quantity”, devoid of substance leaving only volume. This quantity is most easily modeled geometrically by a simple cube with a volume equal to 412.5 units.

The American gold coin in circulation when 412.5 grains became the new weight for the silver dollar was the eagle with 247.5 grains pure gold. It was the equivalent in value to ten of these silver dollar coins. Therefore the gold eagle was worth the same as the 4125 grains of coinage silver comprising the ten silver dollars. This too is most easily modeled geometrically by a simple cube with a volume equal to 4125 units. This is a very special cube. We can see why I say this by examining its remaining parameters:

Moreover, and of great significance, is that the grain/gram conversion coefficient just used above is also the surface area quantity of this very special cube.

Note that .999996… again shows just how closely our measures have been designed to conform to the ideals of geometry and mathematics.

So we see that geometry fuses together in one simple cubical form numerical “quantities” that mankind has come to use, also together in a single simple system. This system includes the weights of the U.S. gold and silver coins, using both systems of weight measures, along with the very quantity that unites these two systems!

Another example of this can be seen in the form of a regular tetrahedron. When it is scaled having an edge-length equal to 15.43235835… (once again, the grain/gram conversion quantity) then its surface-area will be 412.501209…

If instead, the tetrahedron’s surface area is a perfect 1.0 square unit, then this tetrahedron’s volume becomes .05170027… again a quantity through which geometry gives birth to the U.S. gold and silver coinage weights, again in metric:

What are the odds of all this happening by chance rather than by choice?

It’s becoming obvious that the “quantity” 4125 (and its powers) is inherent to the geometry of form as well as to our systems of measurement. It functions much like the common cores in the models pictured above in that it literally unites metric and standard measures. Here is another clear and perfect example.

Construct a line 2.0 units long. Construct another line (2.0 – .4125) units long. That’s it! If the length of the longer line is deemed to be one millimeter, then the shorter line must be exactly one 32nd of an inch. Let’s do the math.

This is really quite remarkable since “history” tells us that these human designed weight quantities were arrived at subjectively and arbitrarily. We know the gram is a derivative of the meter measure, which was alleged to be a ten-millionth part of the earth’s quadrant running through Paris France from the North Pole to the equator. However, the same history also notes that the birth of the metric system amidst the French revolution in the early 1790’s, and the Coinage Act of 1792 in the USA, both occurred contemporaneously. Prior to this point in time, the “quantities” 15.432…, 16.037…, 412.5, and 247.5 existed only in the eternal relationships among the forms of geometry.